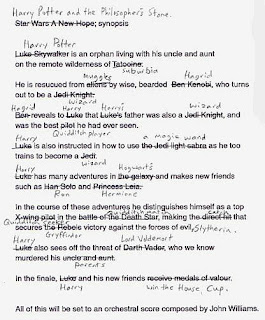 You may have heard from a cynic or two out there that there is no originality left in the world. They may have been referring to Hollywood’s penchant for sequels and remakes in order to make a quick buck or this guy, or they may have been referring to Harry Potter’s striking similarity Star Wars. So, are those cynics right? Is there, in fact, no originality left in the world? Have all of those jerks from Ancient Greece taken up all of the great stories of humanity while Shakespeare filled in the gaps a thousand or so years later?
Well, I’m here to tell you that those cynics are just being… cynical. There is still originality in the world. Every day, someone is doing something that has never been done before: whether it’s discovering a step on the way to infinitely renewable energy or eating a three-scoop ice cream cone while riding a bicycle down Fifth Avenue. And, this is all without taking into account the advancements we have made in technology in the last one hundred, fifty, or ten years, or even just yesterday. How does the iPhone affect the world we live in? How do Twitter and Facebook transform the “human experience” when you can read about every minor activity of someone who moved away during middle school?
Because that’s just what it’s all about. Literature is all about what makes us human. It is about what makes me, you, Ben down the street, and Carlos a country over the same. So far, there have been a few core themes that have been running through stories, due to their ability to cut straight to the core what makes us human, stories that grab us right by the heart strings and choke out some sort of emotion from us, either willingly or forcefully. Just think about it: How many movies have you seen that involve some sort of romantic entanglement, either as subplot or main story? Are there so many you can’t even begin to list them? This is because love speaks to us, whether to the chick flick aficionado or the action hero he-man.
But love isn’t the only emotion that makes us human. There’s also lust, greed, courage, sacrifice, envy, the list goes on and on and on. These emotions and drives are the timeless aspects that the cynics dub as unoriginal. But, while these emotions may have infiltrated everything in one shape or another, how they are portrayed, or how they affect a character’s life do not need to be the same.
Return once more to the Star Wars/Harry Potter reference I dropped earlier. Both stories, when broken down into their barest parts appear eerily similar, of course they do. The story of a young person leaving home and finding their way in the world is such a common trope that they’ve created a word for it: Bildungsroman, or coming-of-age story. Nearly everyone wishes to make themselves into someone interesting and independent, it gets back, once more, to the various things that drive us in this world. I mean, you, as a writer whether published or unpublished, are trying to do just the same. You’re making a name for yourself that is separate from that those who came before you. This doesn’t mean you’re a cookie-cutter person. It means, that you are Harry Potter. You are Luke Skywalker. You are Katniss Everdeen. You are Esther Greenwood (hopefully without the depression). Originality hasn’t left the world, some of us have just stopped living it.
Posted by Dr. Aaron Lewis at 11:04 AM